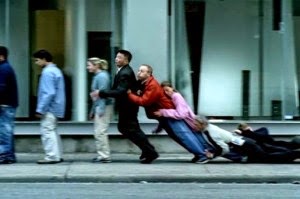 He's been telling me for years to stop changing my mind! His voice is usually strained, higher pitched than normal and quite obviously wrought with sincerity and hope that THIS time I will get what he means.

I also have a great friend who spent a few years chastising me every time we got together "but you SAID...and now you're saying this?" until I guess she gave up and realized I would probably change my mind yet again. Who can keep up? Sometimes I can't keep up to the changes I make myself.

I DO try to keep my promises. Those don't change. But if there's a "better way" to do anything, I feel I can and will and should try. I know I SAID I would do it one way, but  after further investigation, or a better understanding , a cheaper price elsewhere, a better day, better weather, (there are 1000+ reasons WHY), I will change my mind, the plan or the thing. Always for "everyone's benefit" I am sure.

For fifty plus years I never figured this a problem, as long as I was considerate enough to notify others. Usually the plan would make it better for EVERYONE concerned. My husband and friends would hopefully one day learn to roll a little faster to keep up with these betterments. Right??

I finally am starting to see that the answer is actually WRONG!  It took a few events at my daughter's wedding last week to see that quite often one change for the better for me, can dwindle down to one big change to make things worse for someone else.I managed to see it because for once, the plans changed ON ME- by other people and I was left facing the awkwardness of  more than one situation.

It's a bit of a habit in our family- everyone out for what suits him or her best. Let everyone else fend for what's left? Maybe they've been watching me do it for myself all these years and it has finally come back to bite me in the bus I almost had a mutiny on an hour before the wedding. It definitely bit me when the nth hour had a change in the rehearsed seating of the parent's sides.I still don't know why it happened, only that I got to see the awkwardness of my bride's father and step-father trying to get around each other as we stood behind him and not on the other side of Karly. Water under the bridge my bride tells me. So why does it still taste so bitter?

Can I be seeing that by changing something to best suit me, it may not be what best suits the people possibly behind the scenes or someone I had NOT thought about? Or that by taking one choice and not sticking to it, I domino others who make their decision based on mine and then will possibly need to change as well?

Why is it so hard to decide on something in the first place? Ever order the Orange Tiger ice cream and then immediately wish you'd gone for chocolate mint instead? Happens to me all the time.

Saying that, I can see it's not going to be an over-night change into a one-decision gal. BUT, I am now aware of how bad an attitude that it is: right up there with being selfish, tyrranical, devil-may-care about anyone standing in line behind me. It's sad because I wasn't raised that way. And I spend so much time trying NOT to be like that. I figured I was such a giving, caring person. But it seems I am only like that until it comes down to my own choices.Then I figure it's all about what I want. Or think I want at that moment, reserving the choice to change my mind.

So, I'm going to try and work on it. It's all I can do at this point. Show by example to my family. And for once, I am not going to change my mind  about that or try and change anyone else's mind  about the matter, either.

Gives YOU something to think about, I hope.

Posted by DebiLyn Smith at 5:15 PM