At the tick of the New Year 2016 I was standing in an elegantly decorated hall in Balzac Alberta with close to a hundred of our friends , family and people close to my son to celebrate his marriage. To count blessings, the room also held our other children, their spouses and our first two grandchildren born within the past 4 months. My father, having recovered fully from a hip replacement in April, was dancing with my ex husbands older sister and all around me people were smiling and cheering the new year and I remember thinking how fast everything was going. The carousel was hitting mach one.The night was ending and I didn't have enough time to say what I wanted to my family, to get to know the new faces, to cherish each breath of the newborns. 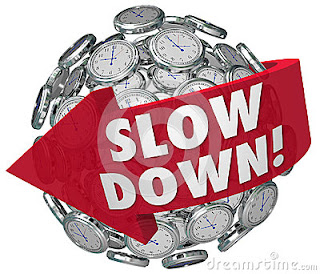 Funny that 2015's blog started with talk about procrastination and sluggishness. It felt that way at the time. There was no energy. No insight or willingness to dream about what might be coming. Things stayed that pace until August when the first grandchild arrived a week early followed two months later by another grandchild born three weeks early. This wedding was the cherry on the top but it still threw everything into high gear and after the months of prepping and sorting and planning then doing and being and repacking and leaving, we were careening the same way we'd come only this time westward down the highway at breakneck speed on our way home to the place where things do get sluggish and where we can procrastinate again, if we want.
Already imagining soaking in our hot tub with cold drinks and memories to rehash, we were violently slammed into a reality check with the twist of a steering wheel, the holler of "we're going to hit that truck..." the airborne stop sign , the hood of our vehicle slamming up against the windshield while feeling the suburban fly downwards, our heads whipping forward then back, and the landing in a field. A man standing outside his home on the ground before us stood mouth agape, a saw in his hand. His look reflected the shock I was feeling. Did that just happen?

I clawed off my seat belt, throwing my arms around my husband's neck, thanking him for saving our lives before hustling out of our vehicle terrified of what I might see back on the highway. A white PNG gas truck, the one we came so close to smashing into the passenger side of, sat facing the middle of the highway with the tailgate on the ground, the back side smashed in and the box contents  of screwdrivers, gas meters and battery packs strewn for yards. A long highway truck with a full load of lumber that had first hit and pushed the  left-turning eastbound PNG truck in front of us lie in the east bound ditch, load askew and front grill of the truck smashed in.

It turned out that once we opted to bail into a field instead of  t-boning the PNG truck, the west bound flat deck highway hauler cruising at 90 kmh behind us had a clean path to smash the PNG truck on it's hind end spinning it around before the tailgate fell off. We came so close to being the roadkill filler between the two vehicle sandwich!

Within three minutes all four drivers were standing cell phones to ear in a semi-circle, all shaking their heads in disbelief that no one had been hurt beyond whiplash or bruising.

And here I sit six days later still in awe of the fact that all of that forward momentum could end so abruptly. Months of fast forward was slowed to a panel by panel sequence at the first pump of adrenaline.

You're driving down a highway thinking about the week that lies ahead. You're flying through the air. You're still.

Two seconds that slowed to seem like five minutes. I could tell you every detail within that tiny stretch of space and time.


And for what purpose does our body do that to us; to slow down time like that? Or is it possible that's the way things really are? Maybe life really does move in slow motion? Maybe all time can be freeze-framed second by second if we choose to stop and look at it that way. Does there have to be a major catastrophe for us to slow things down and really see every second?

I'm thinking the problem is we don't want to slow things down to that speed. Or more precisely, we don't HAVE time to. Not until time makes us take it. And thankfully my husband and I didn't run out of time. We were merely given a chance to appreciate the fact that we had any time at all.

This greater appreciation of my time and what's left of it, is just the catalyst I need to get back on track to make the most of it. Procrastination and sluggishness were a part of 2015.