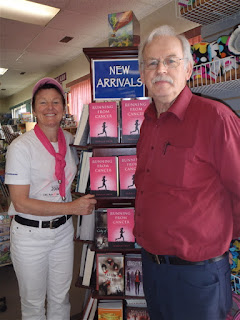 Life on the road literally picked me up by the shirt and flew me through the calendar days.
The Grand Launch of my first books anywhere began in Prince George on May 10 at Books & Company. I wrapped my arms around my first customer,  a friend of my sister-in-law's  who had expressed interest in the book. The stream of customers continued and my nervous doubt was eliminated. By the end of the launch, I was an author, complete with cape and sword, ready to save lives from cancer one person at a time.
We relayed in PG on the 11th and went home to launch again in Burn's Lake on the following Tuesday. Burns Lake was a book signing at PharmaSave and my first library reading. An audience of five, which I was told was a good turnout,  was more like a gab session with girlfriends. I read, we talked, I read, we talked some more. It was wonderful.
Houston greeted me with flowers at AquaFit and a line-up at Brewstirs coffee-shop for signings and books. The day ended with a signing at Countrywide Stationary in Houston, a dream come true. Signing books at my local bookstore. I was a bit weepy at times. Thanks everyone for your support! My reading that night was also well attended by close to a dozen well wishers. You could have heard a pin drop as I read.
Off for breast recon surgery on May 23 in PG  before arriving in Quesnel May 25th for a busy book signing at CaryAll Books.The next day relay was cool, but so much fun with my teenager-team the Fighters For Life.
Terrace saw another busy book signing at Misty River Books and a later library reading with an audience of six.
Prince Rupert was also a great place to be. The people there were so inspirational. I got to give back by doing the Fight Back speech.
But Smithers. Smithers was the best of them all. My team mates were young mother's and babies. So occupied in their everyday lives but still finding time to raise funds and promote a life without cancer. Their team snack table rocked! All fruit and healthy snacks like vegis and dips and wholesome cookies. Together we survived the cold and rain and sun and wind until 11 when I gave a different speech- this time a fight back/ luminary speech. My most powerful of them all. I then had the honour of lighting my candle first from the candle lit at the beginning of the ceremony by a young boy with leukemia, before I left the stage and began to light others. It was a touching moment.
I went home by 1 in the morning, crawling into a soft, warm bed supplied by our close friends from Telkwa. I slept well knowing the relays for me were over for another year.
Today I realized I would be able to sit down and work on editing the first of the two mysteries, Not Just One, which excites me to no end. That book was written possibly 5 years ago or more. I have some work to do before it returns to my editor who's suggestions for changes I'll make before he really gets down to the pro edit part of getting a book to the publishing aspect.
Back in the writer's chair again. It is just so exciting. Now to switch hats from non-fiction to mystery. Now, where was it I hid that murder weapon???
Posted by DebiLyn Smith at 2:20 PM No comments: