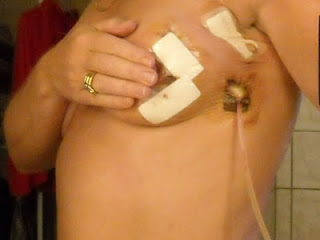 Today it has been 12 days since the second surgery: the widening of the first lumpectomy and the axillary lymph node removal. I have parked myself on the couch as the leather feels nice and cool on my recovering skin and I am able to elevate my right arm while I watch yet another episode of the LOST series I rented. There's a ridiculous stack of DVD's three feet high on the floor and I have a feeling I am going to get though them all. The mobility of my right arm does improve steadily every day. I can now lift that elbow as high as my chin, use it to brush my teeth, spread mayo on sandwiches...that kind of thing. But it tires quickly and I'm back to the movies. I wake up every morning with aching breasts. I can barely touch them, they are so sore, so tender and I know I have to get up to eat something before I can take the Torodol anti-inflammatory which will take the discomfort away. I saw Dr. E on Thursday. After admiring his handi-work, which he says he usually does not do and I believe him, he replaces the bandages with fresh ones and cleared the tubing in my drain. It can come out next week. That means another few days of catching it on the kitchen cupboard knobs and doorknobs. It doesn't really hurt in any way, just is a bother more than anything and is disgusting to have to empty, especially at first with the blood clots in it. The only part that really ruins things is the amount of liquid now sloshing around inside my breast. With half of it hollowed out, it's like a water bed inside and every step gets it rocking. I grip it with one hand and squeeze to stop this but it doesn't help. It's too far inside, so...it's back to the couch. I made it to the gym on Friday and tried pedalling on an out- front stationary bike. That worked well. Thirty minutes on that plus some weights with my legs and I was back to the couch. It's all good. My morale lifts with my new momentum, yet I still feel anxious about the next pathology reports that hopefully come on Tuesday, the 2 week mark since the nodes were sent. If there's any more cancer it may mean more surgery plus radiation in that arm, and they say I do NOT want to go there. Okay. I'm convinced. I do NOT want to go there. I think, actually, that I might just want to go back to that couch. There's still three more LOST seasons to watch.
Posted by DebiLyn Smith at 1:05 PM No comments: