I want to send acknowledgement and a huge Kudos to Table 100 for the website project of www.debilynsmith.com. The site is up and running, looking very professional, yet informal.Just what I wanted. It's a great avenue for showcasing my work and you've done an incredible job, persevering through the constant changes. I'm sure it wasn't easy when you had to deal with someone that uses 500 words to your five.
Congratulations on another happy, satisfied customer. Feel free to use my name as a reference for any future reluctant or indecisive clients. I can honestly say it was worth every cent!
Thanks again.
DebiLyn
Posted by DebiLyn Smith at 5:29 PM No comments: 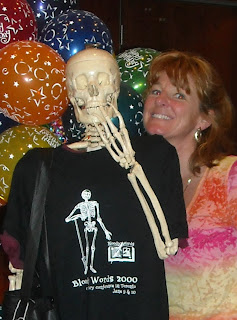 I have returned from the 10th annual Bloody Words Mystery Writers conference in Toronto with what I consider good news. Instead of having my dreams squashed, my work laughed at and doors slammed in my face (as the nightmares went) I am filled with hope, a renewed vigil and even a deadline of sort for my future. It was all good, all interesting and definitely worthy of the champagne my sister bought for us to celebrate with on Saturday late-afternoon. But before that...

I started my adventure lost in the Hilton Hotel for almost 30 minutes before finding the escalator that took me downstairs to the conference area. Once I saw the skeleton with the Bloody Words t-shirt, I knew I was finally there! Festivities started with a 5:30-6:30 meet-and-greet with glasses of wine for purchase and phyllo nibblers being passed by white-gloved waiters.I figured one glass of wine and a pastry-laced dinner a la BW wouldn't hurt, so I eagerly drank and noshed without abandon.

My interview with the esteemed Christina Hogrebe of the NY based Jane Rotrosen Literary Agency was at 7 PM, so it was with a wine-loosened tongue and buttery-throat terror that I was brought to her and introduced in the Varley room. While seated at a linen-draped interview table, Christina had a glass of red wine at her side, perhaps to suggest the informality of it all. To help de-stress the situation? Unfortunately, this was lost on me. I think my nervousness compounded with how much I truly wanted to work with Christina. Of the 4 attending agents, she was the only one actively looking for female based literature. Her on-line bio was written with a light, humorous touch that mirrored the way I usually try to address things and although I was concerned with having an American agent, Christina professed her fondness for my childhood idol and Canadian heroine, Anne Shirley. Christina was another kindred spirit!
The"emotional meter" was at an alarming high. I am still amazed I didn't throw up during our meeting.

I began just fine. I even handed Christina a copy of the "script" I would be following to explain my background and key points of the books. A plan which I still kick myself for not following. When talking about Not Just One, I skipped from the beginning to the near-end, to the middle, then tripped around bringing up other key actions out of sequence as her eyes grew rounder and rounder.
"I think you might have enough for three books in this one," she said, seemingly lost in the jumbled mess that had spilled from my overly lubricated throat.

This is about when my lower left lip began to tremble. At first it was slight, but within a breath, it was a full blown earthquake happening right there on my mouth. I looked into Christina's big eyes. Could she see the twitching? Did she worry I was insane? Would I next start to froth, coming to a full lather before my allotted fifteen minutes were up?

What was she saying? Her lips were moving with sound, but I could not hear. The twitch had a thrumming pulse that filled my ears. I watched and her face turned away from mine. Her hand went into her purse. She is from the United States.. Would she pull out a stun gun? Mace?
But out came a business card. "Think about what I have said and then send me something in about a month." Her smile was large. And sincere.
The administrator was at my elbow to escort me so I rose and stumbled away, turning once, not sure if I should shake Christina's hand or do what I felt like which was bolt from the room, lamenting, "Oh, no! I'm such an idiot!"

All night I mentally whipped and cursed myself, not thinking that the outcome had been good. I had the golden business card and a personal request to see more of my work.It doesn't get a whole lot better than that for a first time author. Okay, she could have begged to have it sent right away. As it turned out, it was for the best that she didn't.

The next day came the manuscript evaluations. Not Just One was with Barbara Fradkin who thought it was very good. "It's hard to write humour and mystery together, but you did it quite well," she said. That's not to say there isn't still some major adjustments in the first chapters dealing mainly with back story versus moving the plot along faster. I have a problem with switching from past to present tense through out as well.
Barbara gave me a big hug when we finished and wished me the best of luck with it in the future. Now I have my work cut out for me. Armed with an experienced writer's comments and suggestions I can present something very professional to Christina next month.
Best of all, I received the validation I had went to Toronto for from not just one, but two multiple-published authors.

That night was the wind-up dinner. I delivered wine tickets to thank some of the key volunteers for helping me bumble my way through my first BW, including one for Barbara Fradkin. I also took one to Christina. While there, I told her honestly what the evaluators had to say about my work. She responded by saying she was looking forward to my submission to her next month. She was even concerned that the agency was having e-mail problems and to keep trying if mine didn't get through to her. We left on a good note. Not just a good note, but a note that didn't feel finished. It's like meeting someone who becomes an instant friend. You look forward to seeing them again some day. I hope I get that day. Maybe in PEI, I told her, where Anne of G.G. was written?
So, it was a worthwhile trip, if not only for rubbing elbows, sipping cocktails and having dinner with other writers, even some pretty famous ones! There were the workshop classes and an open mike session of ask an agent! Yes, I brought up the Canadian versus American book sale and setting for your novel question. I think agent Helen Heller said it all when she said "I disagree" quite firmly to agent Stacia from New York, before advising us to, if we could, set our stories south of the border.
Interesting conversations.

I have one month to get these books revised and ready. There won't be a lot of e-mail, face-booking or blogging time, but I will keep you posted on any new developments.
Until then, thanks again for becoming a follower of all these Dribbles from DebiLyn. Today I feel like I am one giant step closer. It IS going to happen!
Posted by DebiLyn Smith at 1:57 PM 1 comment: