Stop the Slide (I think I'm going to be sick) 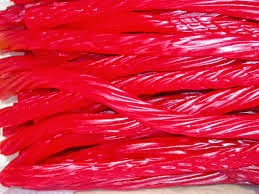 Another Monday with a confession following. My initial hope was to be an inspirational blogger on weight loss strategy for the new year.But things haven't gone as planned. For three weeks now. In fact, with two big bags of red licorice and one of potato chips (which I rarely eat) under my belt and an evening of full fat cheese, incredibly delightful East Indian fare with creamy paneer, fried samosas and doughnut balls soaked in sugar, I think I gained weight this week. My scales are broken, but my ski pants never lie. They're tighter!

No, I didn't touch a drop of alcohol so I saved some calories there. I worked out six of the seven days and ate wisely all week except for Friday and Saturday evening when I figure my idea of "letting loose" got in my way. (Hey, I'm still a reckless Party Girl!Watch me eat this ENTIRE bag of potato chips!)( and...what is a movie night out without licorice? I had to buy two big bags because my husband wanted me to share. Then he only ate three ropes. The rest simply disappeared electric pencil-sharpener style down my throat).

This decline from healthy habits seems to be ALL about attitude and  a post breast cancer "I don't care...I WANT TO FEEL ALIVE AGAIN" coming out of my pores.It's that kind of attitude that gets us overweight, into ruts, disease-laden and headed for an early retirement of the more permanent kind. If I keep this behaviour up, it will become harder and harder to stench the flow. Now that I've opened that tap again I'm finding it ridiculously hard to turn off.But it has to.It's a slippery slope with the bottom, the end of the path, being death by over-indulgence. That's where it ultimately leads; to obesity, heart disease, cancers,diabetes and on and on.I'm a far cry from that, but like an avalanche ...

Actually, it doesn't matter how far down the slope you've slipped. There will be a reckoning between you and your mirror or your ski pants where you decide to climb up instead of continuing the slide. The amount of determination has to equal the amount of your wanting to succeed. To be what you visualize yourself being. The only way to do that is to stop the process. To stand up to yourself right now and say "drop those treats." Then go stand in front of the mirror naked for ten minutes and see if you still want to eat them. No, I didn't think so.At least that's what I do.And need to do more often. Because I'm sliding on that slippery slope and instead of slowing down, the sliding is speeding up.

I have learned from experience that the longer I leave facing the trek back up, the harder it becomes.

So a few tips for us to remember:

Water is your best friend. Not only will it help flush the cravings away, it will get rid of toxins from the bad food, keep you full and plump up your skin.

Hungry? Make a pot of tea. If that doesn't work, have something ready and sensible to follow up with. An apple and a tablespoon of peanut butter. Celery and carrot sticks. Pop some cherry tomatoes. Crunch up ten natural almonds.

Tempted by a sweet tooth? I sweeten things with dates, natural stevia and honey or fruit juices sparingly. I found a Stevia in a hazelnut cream flavour and between that, Chai green tea bags and almond milk, my Chai tea lattes are once again back on my menu.

Crave salt? I overcome this by eating dulse, a dried ocean food better known as seaweed.

Need something sour? Eat cherries or make a sugarless fruit compote. Simply simmer apples, berries, chopped dates and a shot of any type of juice until thickened. Top with fat free, low sugar plain yogurt and a sprinkle of pumpkin seeds.

Want a chocolate fix? Try the Sinless Chocolate Macaroons in my book Running From Cancer.

There is an answer to anything you're craving. Pizza? Buy the brown rice crust by Bob Miller packaging, plain tomato sauce with spices, toppings and low fat cheese. Lasagne? Use brown rice pasta noodles, no fat cottage cheese and skip the meat.Ice cream? Eat no fat yogurt with fresh fruit. It's all do-able.

As for a substitute for red licorice, there is fruit leather but I think I might simply skip the movie going for another six months.

Of course, if you can wear all the excessive calories off by exercising for hours, then there isn't an issue other than the lack of nutrition you would have received from eating healthier
.

It's a scale of balance and I'm GOING to tip things the other way. The first thing I'm going to do  is lessen my stress about it all and promise to stop talking about it on these blogs. There! I feel lighter already.

We all know what we have to do. Now lets get to it.


Posted by DebiLyn Smith at 4:42 PM No comments: