The final word is in and the little town of Houston managed to soar past the donations raised by our larger Relay contender of Smithers. That is an unbelievable tribute to our community and the people here determined to fight back against this sweeping disease.
The evening started off with Hurricane Andrew as the locals dubbed it. My team mates of Boot Camp Girls threw their weight across our tent trying to pin it from leaving earth. Thankfully they succeeded and although the grass at the Four Season Park remained damp most of the evening, things went extremely well afterwards. In fact, they are considering hosting upcoming Relays at the Four Seasons, it went that well. Nice and private, not close enough to disturb neighbors as much. 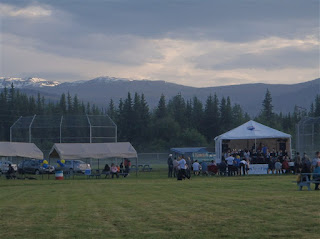 The evening was filled with wonderful music and local talent from Magenta and the HSS class band. There was belly dancing and singing, guitar solos and wind instruments. Memorable speeches from  icons like Chief  Russell Tiljoe and cancer survivor Gail Jarvis. 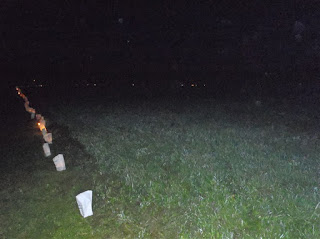 And the evening was off and walking for 12 hours around a track soon filled with 430+ illumiaries. These white bags upon which people had written and drawn on, held names of cancer victims, some still with us, many not and held a canned good to hold them in place as well as a tea light to illuminate what was written. It was haunting and beautiful at the same time.
Tents dotted the inside of the track with teams huddled around blazing campfires for warmth and the long night ahead.
In the morning we watched the sunrise with new eyes of appreciation for life and all its wonder. The Fight Back portion was started and I had been asked to give the speech.
While dressed in camo gear, I barked out the following after first delivering a salute to the crowd gathered before me:


(spoken with a Southern U.S. twang and said LOUD)

It’s Sergeant Smith reporting for duty.
And you look like the sorriest bunch of do-gooders I have ever laid eyes on.
You look like the kind of soldiers we send down to the Marine Corps so they can be contained on a ship and not able to run about.
Well I’m here to kick your butts. To shape you up or ship you out!
I’m here to make sure you do your darndest to stop that number of cancer victims from rising as fast as it is.
Are you listening? 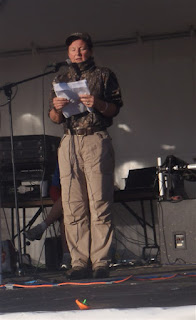 You are going to learn not to take any guff off of those dirty little cancer cells that you have inside of you right now. The ones your body has to seek out and destroy everyday. And they will do that for you- they will kill those commie cancer cells dead if they have the right weapons to fight ‘em off with.
So are we going to do that? Are we ready to fight back against cancer?

I can’t hear you?

That’s better.
Company at ease.
Before I give you the weapons, you need some instructions on why you need them in the first place.
Truth be told, I salute every one that is here today, everyone that has taken time, whether they wanted to or not, to confront cancer head on. To stand up and say This Has To End! And with this support maybe cancer can be beaten, or at least slowed down from the raging forest fire it has become.
My name is Sergeant Debi Smith and I happen to know something about fighting back.
I have a typical survivor’s story. A cancerous tumor was surgically removed only to find more cancer in a lymph node, headed toward my bloodstream and other parts unknown.
I did the chemo, the radiation, another surgery. I lost my hair, my spunk and some days all hope that this would ever be behind me. I had to learn to get tough with my cancer but more important to get tough with myself to get through.
I am here to re-affirm to anyone still in doubt or denial that YES, getting cancer IS one of the worst things that can happen to you.
BUT it can also teach you a few things.
BECAUSE, Before learning I had breast cancer, I was just like all the rest of you recruits. I exercised, figured I ate healthy enough when I wanted to and I quit smoking. I drank mostly on weekends. How could I possibly get cancer?It was only after I got that phone call that I started to learn as much as I could about the disease, how it works and what you can do about it. Two years ago I knew nothing. And I got cancer.
Today I know a lot about cancer and so I expect to live a long and healthy life because I now know how to fight for my body. I have learned how most of us get cancer and I truly believe much of it is avoidable, that a lot of the increasing numbers can be prevented.
Are you listening?
Almost everyone has cancer cells present in their body at any given time. They are merely normal cells that have mutated and started to rapidly divide rather than naturally dying off. That can happen if your immune system is not in good shape.
If your immune system is working properly, these mutant cells are stamped out or reabsorbed by our defense system before they can grow any further and threaten your health. It’s a matter of routine for our bodies, even for people with hereditary cancers.  It’s like stamping out  forest fires with your foot.  BUT if your immune system is not all that it should be, it can’t keep up to the dang fires. The mutated cells will get the chance to thrive and grow.
That’s how you end up with cancerous tumors.
Are you listening?
So, what are we going to do about that?
We’re going to FIGHT BACK, that’s what! That’s the good news.
The bad news is it won’t be easy for everyone at first.
A tablespoon of ground flax seed on your oatmeal  is not going to help you if you’re still enjoying too many alcoholic drinks in a week. If you are overweight, stressed, smoking, regularly eating empty calorie foods like refined sugar, deep fried anything and white flour and not getting enough exercise every day.
The more items on that list that you enjoy, the higher is your risk of GETTING cancer.
This is a war people. The numbers of cancer patients is exploding every single day. Inside normal people just like you and I.
We have to give our body the weapons  it needs to fight back. Not just once in a while but all the time!
We need to get tough with ourselves, SOLDIERS, not one of these days but RIGHT NOW!

My research tells me that cancer rates around the world can be slashed by about one-third by merely Promoting healthy foods and exercise. Simple changes in diet and exercise can prevent nearly 40 percent of breast and pancreatic cancers.

On top of that, by adding extra vitamin D to your daily diet, a supplement you can buy at a drugstore, an even higher percentage of cancer prevention can be achieved.

We need to avoid toxins and unnatural substances which include processed foods and preservatives (to extend life); food dyes; hydrogenated and partially hydrogenated foods; polluted air; smoking; pesticides; bleaching of napkins, toilet paper; etc. etc. etc.
Between what’s on the outside and what’s on the inside and what we add to the mix, it’s no wonder so many recruits are ending up in the sick bay.

And one more thing for those cancer survivors.
Okay, you made it through the surgery, maybe even the chemo, the radiation. You have beaten cancer because you’re still alive and your last test says the problem area is clear.
But what you might not know is that unless you correct what it is that let your cancer thrive in the first place, you could be in for a rude awakening of a recurrence.


So this is for everyone. Listen up.
: Here are  EIGHT weapons to arm you in your fight against cancer.

1)    EAT BETTER. Drop the empty calories of white breads for whole grains and brown rice products. Pump up the fruits and vegetables and eat less red meat. Maintain a healthy body weight. It’s never too late to start fighting for yourself.
2)    Sugar is another enemy. Besides causing excess weight gain, it feeds cancer cells. It’s like buying your enemy bullets to kill you with. I’m not saying to never have a bowl of ice cream or a donut ever again. I’m saying to cut it all way back.  Start a treat day- a once a week time to spoil yourself with something you normally eat all the time. Think before you eat or drink anything. Will this help my body or weaken it?
3)    Drink less alcohol. Way less. The connection between alcohol and cancer is astounding. Recommendations, straight from the cancer society and also our Dr Vestvik are one HALF to one drink a day for women. Less if you are peri or post menopausal. Up to two a day for men. No stock-piling for the weekend!
4)    Oxygen kills cancer cells, but we’re not getting enough. . You need to get up and get going .Take up yoga, Tai Chi, a gym class, walking, cycling, hiking. Just get off that couch more often than not.
5)     See your physician for regular check-ups. Don’t put it off- that lump in your breast, the pain in your stomach. Get it checked out NOW.
6)    Get informed on other ways to boost your immune system. Take a supplement of 1-2000 mg of Vitamin D every day. Eat lots of leafy green vegetables, berries and whole grains. And yes, ground flax seed.
7)    Donate. Every volunteer hour, every penny raised gets a cancer victim one step closer to putting the disease behind them. My mini tumour would not have been detected as early as one year ago. Think about what that means for your Grandchildren. Your support makes it all possible and we can’t thank you enough.

8)    Spread the word and then practise what you preach. Tell everyone you know how they can fight cancer. It may be hard at first, but once you figure out substitutes for your weaknesses, like buying 70% chocolate bars instead of milk chocolate and baked brown rice crackers instead of chips it will get easier.

BOTTOM LINE: As I’ve said, this is a war, people. It’s time to get tough and fight back every day.
You have to kill cancer before it kills you.
(Salute again)
Company At Ease
Thank you

The speech was well received. I hope it opened a few ears and will find its way to doing some good in preventing even one more name on the casualty list.

And yes, I'll be reviving the Cancer Prevention Blogs again soon! I promise.
Deb
Posted by DebiLyn Smith at 3:10 PM No comments: