Winding up Beside Michael Slade

What an end to a month of touring with my Running From Cancer memoir. I'm finally winding it all up and packing my bags for the flight home tomorrow night.

The SIWC Surrey Writers Conference was spent rubbing elbows with the famous Diana Gabaldon of the best selling Outlander novels and Micheal Slade of numerous crime/horror/fiction novels amidst at least twenty other well established presenters as they ate with us, lectured classes and met us in hallways and elevators always happy to talk about our work or projects and there to help with questions. What a lot of learning we did. I'm looking forward to heading home tomorrow though. Sounds like Barry is more than ready for me to come home as well. 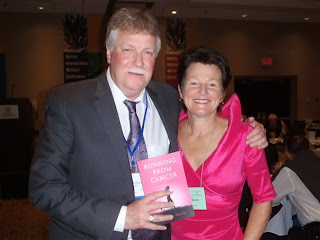 (Michael Slade (b. 1947, Lethbridge, Alberta) is the pen name of Canadian novelist Jay Clarke, a lawyer who has participated in more than 100 criminal cases and who specializes in criminal insanity. Before Clarke entered law school, his undergraduate studies focused on history.[1]Clarke’s writing stems from his experience as a practicing lawyer and historian, as well as his extensive world travel. He works closely with police officers to ensure that his novels incorporate state-of-the-art police techniques.[2] Writing as a team with a handful of other authors, Clarke has published a series of police procedurals about the fictional Special External Section (Special X) of the Royal Canadian Mounted Police. His novels describe Special X protagonists as they track down fugitives, typically deranged murderers. Four other authors have contributed under the name Michael Slade: John Banks, Lee Clarke, Rebecca Clarke, and Richard Covell. Despite the collaborative nature of the books, Jay Clarke is the predominant voice in their writing[citation needed]. Currently, Jay and his daughter Rebecca write under the Slade name.

Slade's novel Ghoul is on the Horror Writers Association's recommended reading list.[3] His work is published by Penguin.
Fans of the series are referred[citation needed] to as Sladists, a play on the word sadist.
According to a 2008 report[4] on horror movie website Arrow in the Head, Headhunter was optioned for a movie by Brightlight Pictures, set to be written by Wil Zmak and directed by Patrick Lussier. The project appears to have died; as of August 2011, no further details have been released and no information is available from Brightlight's website.  (from Wikipedia)
Posted by DebiLyn Smith at 11:22 PM No comments: