Hopefully you take the time to attend at least one Canadian Cancer Society Relay for Life,  not because you have or have had cancer, but because you're interested in what goes on. For many (too many) it is an annual pilgrimage to celebrate their survival of the disease or to honour someone that didn't. Because of the book tour I had the privilege of attending four, this Saturday being my last this season in Smithers.

Funny how the spin of this slogan differentiated at each community. Small distinctions, but noticeable.

In Prince George, the only  remaining 24 hour relay, team tents were set-up three rows deep on the one side of the track. The inside track was reserved for team's raising over a certain level of donations, like the Pink Panters team I was on. That tells you the amount of people attending. At the usual invitational Survivor's Tea before our walk began, there were treats piled high, all labelled with their ingredients. The date squares called at me until I relinquished and delighted at the energy I got to run the track with for a bit. It rained and blew hard enough to break my umbrella stand, but still the 24 hour trekkers kept going, about eight people doing the entire day themselves. There were amazing prizes for big earners like a car, a trip to anywhere ( the winner planning to go to NFLD) and helicopter rides. There was plenty going on at any given time.

In Quesnel I was with a team of teenagers and we walked the only grassy track of the relays, my team captain Kyhla on crutches from a soccer injury. It rained again but more gently. A few tents sold items to raise money but hot dog and perogie/cabbage roll vendors were on site, which cut into other food sales. Our hands were painted for the survivor  banner  I rercall the first time I did this was last year in Houston- my first year cancer free. I made my hand in the shape of "the bird" before blue dye was applied and I planted it on the banner for posterity. .My team had made beautiful tye-dyed shirts to sell, each with colourful cancer symbols that could be further decorated on the spot. I couldn't stay for the Luminary ceremony being fresh from surgery the morning before.

Terrace complained there was a drop in attendees as Kitimat, Terrace and Prince Rupert Relays were on the same day. Still a good crew walked in thesunny panoramic mountain view after giving our autograph's for a banner to be displayed. Extremely original and creative fundraisers circled the track, from quilt raffles to cupcake icing, a message board and fresh hamburgers. We stayed until after lunch and headed west.

In Prince Rupert, I lost my heart. There, a small remainder of walkers greeted me upon arrival mid-afternoon, fresh from the Terrace relay. The bulk of donors and well-wishers had stayed for the opening ceremonies and kick-off then departed, leaving a representative to walk the track. Brian, a man not in the best of shape, walked in long strides in honour of someone still facing their battles. He walked the entire twelve hour, collecting a bead to put on a necklace for around his neck after each lap passed. His face was beet red, his swollen feet sticking to the socks changed every few hours, his face set with determination. But the smile, the smile never slipped nor did the attitude. A standing ovation greeted him after his last lap of the 30 circular  miles. Paper lanterns appeared and we lit them as well as the luminaries, barely visible but enough as twilight began to descend. Being so close to the longest day of the year and further north than the other communities, it never really got pitch black out until long after the last tail lights had left the school track.

This Saturday is Smither's turn. Knowing some of the people will be fun. Being in the shadow of my favourite mountain, the one I stared at from a chemotherapy chair in the Smither's Cancer Unit will be comforting as well. I'm on a team called Bubs and Babes- what is a Bub I wonder and what does it wear? I was thinking Grandmas and Hotties but I'm now thinking it's Moms and Tots. It will be fun no matter what. Especially if babies are involved. 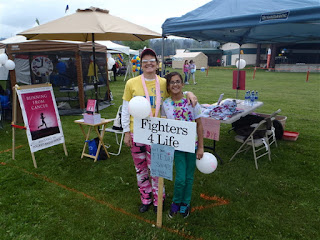 Maybe see you there?
Posted by DebiLyn Smith at 7:50 PM