The Japanese and Chinese cultures have long recognized mushrooms for their medicinal purposes. Many mushrooms have antioxidant,
anti-inflammatory, immune-enhancing, antiviral and possible direct
anti-tumor effects, so it is biologically plausible that consuming mushrooms will decrease the risk of cancer.


Mushrooms
In 2009, a case-control study of the eating habits of 2,018 women suggested that women who consumed mushrooms had an approximately 50% lower incidence ofbreast cancer. Women who consumed mushrooms and green tea had a 90% lower incidence of breast cancer.[30] A case control study of 362 Korean women also reported an association between mushroom consumption and decreased risk of breast cancer.[31]
http://en.wikipedia.org/wiki/Risk_factors_for_breast_cancer


While the most powerful mushrooms like Agaricus Blazei Murrill(called ABM) and Reishi are not sitting on the grocer's shelf, there are more common varities you can eat to help reduce your risk of getting cancer.

Good news. The common button mushroom is one of them, as are shiitake, maitake, portabella, morel and oyster mushrooms.

The Asian mushroom , the shiitake, improves immune system function. It's supposed to be good for preventing high blood pressure and heart disease, for controlling cholesterol level, building resistance against viruses, and fighting diseases such as AIDS/HIV and cancers. Shiitake mushrooms are often available fresh and are very flavorful when used in cooking. If you cannot find them fresh, they are available as a supplement in most health food stores.

All mushrooms should be well cooked before eating- yes, even the button 'shroom. Raw ones have a potentially cancer causing compound called hydrazines which can be inactivated by heat.

Bottom line, mushrooms are good eating for more than the taste. Cook them well before eating them and enjoy a variety rather than any one specific type. 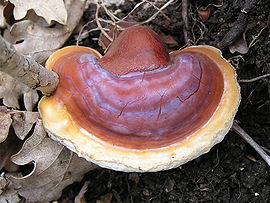 Blends of Mushrooms are More Effective Than any One Mushroom Alone


It is best to utilize a blend of several mushroom species in your diet. For one thing, it's easier for pathogens in your body to adapt and become resistant to one mushroom than to several. Secondly, each mushroom species has a unique arsenal of anti-infective and immunomodulating agents.

Whatever works, is what I say!
Posted by DebiLyn Smith at 5:04 PM