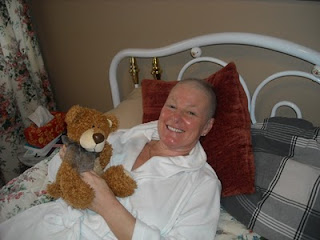 Hopefully most of you enjoyed a typical Valentine's Day. A little chocolate, a little appreciation, possibly dinner out. Barry bought me some ski poles last week that I needed to use with the new mitts I got for Christmas. The mitts are too big to put into my old wrist straps on poles I've been using since 1970-something. I said no flowers or chocolates were needed. I hope to be leaving in 5 days so the flowers would go to waste. (Yes, you know I SAID that but if flowers had appeared because someone insisted, what could I have done...? There haven't been any flowers this end of the cancer. Surgery and chemo yes. Radiation has been very, very different.) But it's not a big issue, honest.
So I am in charge of where to go for a special dinner. Someone recommends the Yellow House restaurant. Gourmet, delightful, seafood. I get the yellow pages out and phone in the reservation. The woman on the other end takes the rez and does not ask for my phone number. I offer it to her but she says it's not necessary. We all think that's funny (us and the fellow that recommended it).
Valentine's Day comes and we stand in the entranceway of the Yellow House after an argument over where to park. A waitress laden with heaped salad plates walks by and we know her. It's Holly Sault's daughter Meaghan! What a pleasant surprise. This is going to be a fun night. Until they can't seem to find our reservation in a booked schedule. It turns out later I booked us at the Yang Japanese House, the number above the Yellow House in the yellow page directory. No one wants to eat Japanese tonight. Yes, a big argument ensued. "I told you to re-check the reservation Monday morning." Who the heck re-checks a reservation, I counter. Sheesh. Yes, he brought up the missing cell phone, the carpet in the bedroom with the old inlay in one corner that he has resented my over-looking six years ago, the deck I put $2000 of Hard Rock on that has since bubbled up and flaked off. Why won't I ever listen to him? He is ALWAYS right. His way is THE way we should do everything.
The result? I almost had an accident driving us straight back home at 200 mph and stuffing the vehicle into my Uncle's driveway, wanting to bash the suburban straight through the garage door. A huff upstairs, more shouting and I undress in seconds. I spend Valentine's evening snuggled up with Homer the bear and a chocolate bar.
It's so us. And I have a feeling this is going to get worse, way worse. As if my life wasn't on borrowed time as it was. I'm thinking the whole absurdity took another week off my life. Why does everything have to be so stressful? Why can't we just laugh at all of these screw-ups and just keep going? Why does Barry think he can fix me? Is this a cancer treatment problem or am I going to be like this the rest of my life? I think I HAVE been like this for fifty years and you know what? It doesn't really bother me. Too bad it bothers someone else so much. Think of the calories we saved. My pants are definitely a bit looser today. I LOVE that feeling.
I think next year I am going to ignore Valentine's Day. Because this isn't the first time this has happened and I can tell you it's not going to be the last. If I could only find that darned cell phone (and my gloves and my watch!)! Then maybe I'd have a half a leg to stand on.
Posted by DebiLyn Smith at 8:55 AM

Email ThisBlogThis!Share to TwitterShare to FacebookShare to Pinterest
Labels: Picture of where Homer and I spent Valentine's dinner